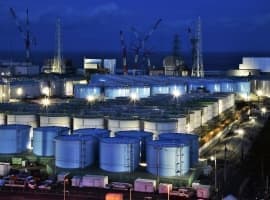 Iran has demanded a payment of billion from South Korea for oil deliveries made in the last few years, according to a report in a South Korean daily that…

Iran has demanded a payment of billion from South Korea for oil deliveries made in the last few years, according to a report in a South Korean daily that quoted unnamed government officials.

According to Bloomberg, the report also said that the South Korean side had deposited the funds in two South Korean banks but had not transferred them to Iran because of U.S. sanctions.

U.S. sanctions against Tehran were lifted in 2015, when the so-called Iran nuclear deal was signed, and only snapped back into place last November.

South Korea was one of eight large Iranian oil importers that were granted a sanction waiver for several months to be able to wind down their purchases of the commodity and find alternative suppliers. Unlike China, Korea was quick to comply with the sanctions and suspended all purchases of Iranian crude ahead of the waiver deadline.

In the meantime, it increased imports of U.S. crude oil. According to the latest import figures, U.S. oil exports to South Korea went up by more than 80 percent on an annual basis, to 1.56 million tons for November, according to a Reuters report. This is equal to about 380,000 bpd. That made the United States South Korea’s fourth-largest oil supplier, after Saudi Arabia, Kuwait, and Iraq.

Now, South Korea is saying it will take steps to transfer its dues to Tehran, in full cooperation with the United States. It is also talking with the U.S. on another topic: humanitarian aid for Iran.

After the U.S. reimposed its sanctions on Iran, shipments of humanitarian aid from South Korea to Iran became more or less impossible, Korean news agency Yonhap wrote last week. Iran has also called on Korea to resume these, the report said.

"The Iranian side expressed its position that it hopes for the humanitarian trade to be resumed and is discussing the matter with us," a Korean government official said. "We are in talks with Iran and the U.S. frequently so that the shipments of humanitarian goods like medical supplies can be resumed using the won-based transaction system."

By Irina Slav for Oilprice.com